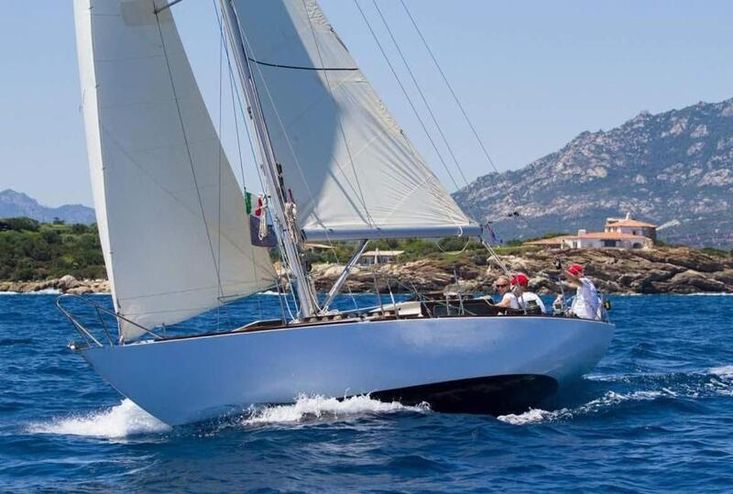 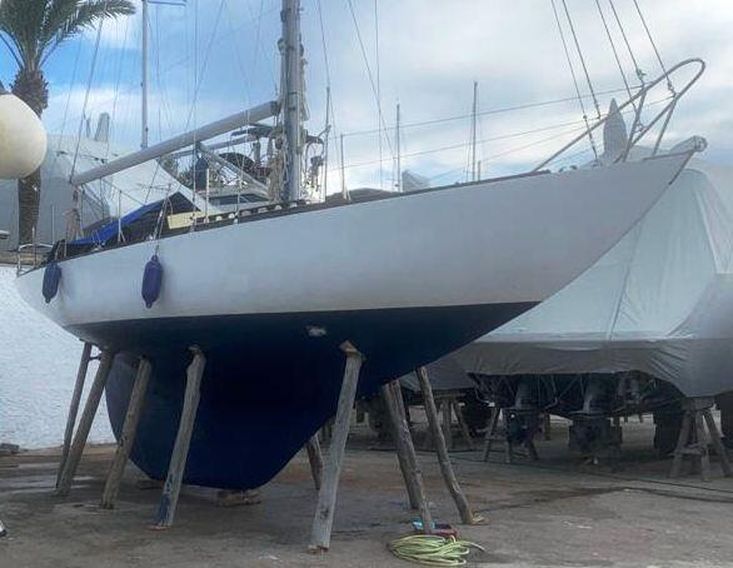 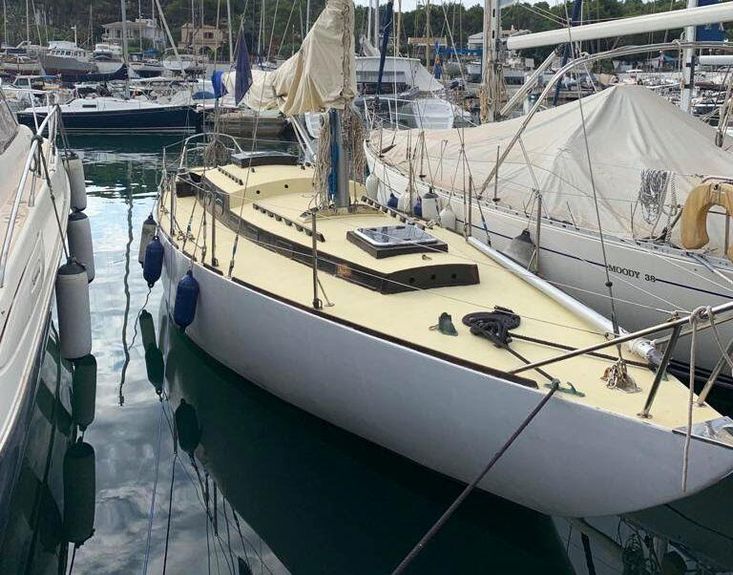 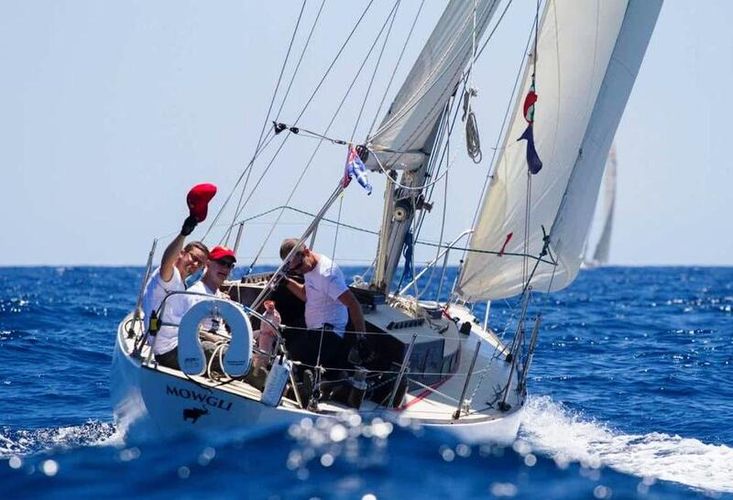 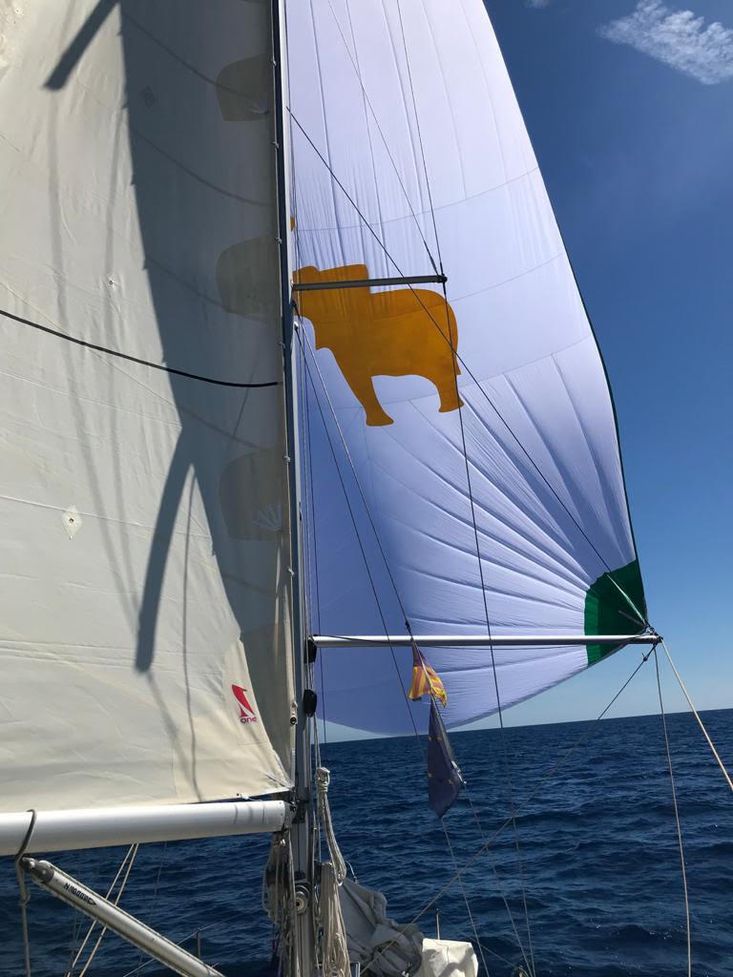 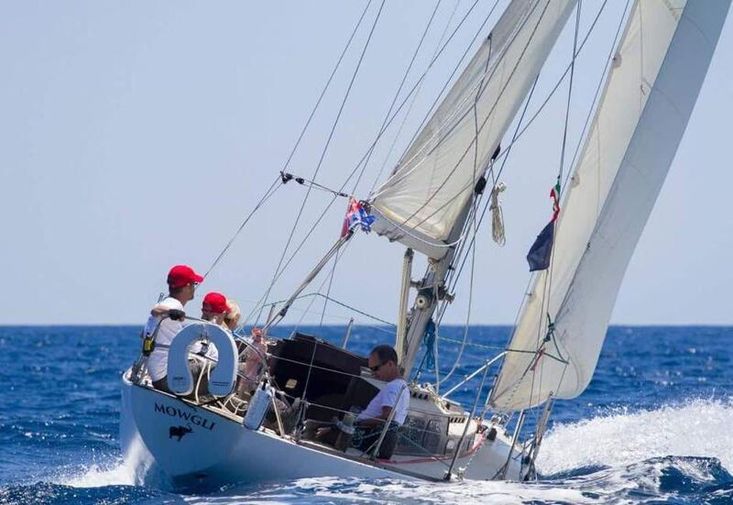 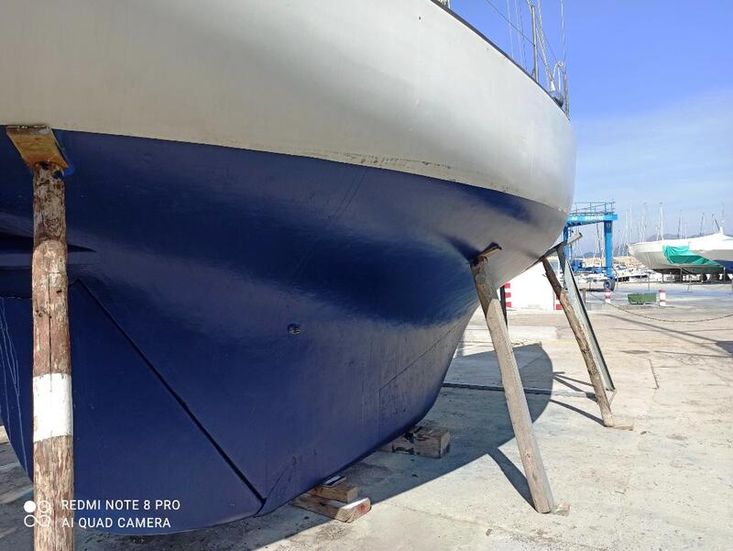 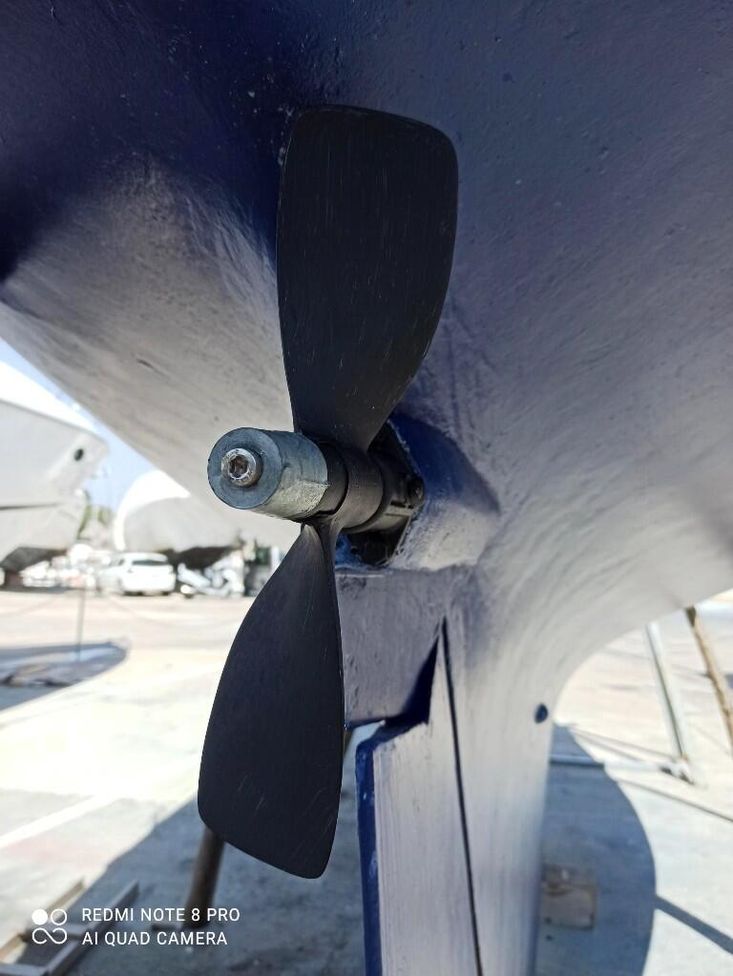 In 1958 Illingworth opened his own yacht design business, in partnership with Angus Primrose. Together they created some of the most attractive and weatherly boats of the era. Illingworth’s role was to conceive the design in general, the rig, and the details of deck and interior layouts, while Primrose gave the hulls their sweet and efficient lines for speed, good sea-keeping and beauty. Many of the firm’s early clients were French. Illingworth spoke fluent French and loved the country. He encouraged and assisted in the founding of the enormously influential Glenans sailing school, where hundreds of young Frenchmen learned to sail – and to become instructors themselves. He was commissioned to design a yacht for the Glenans school, the building of which was put under the supervision of Philippe Harle’ who worked at the Glenans at the time. This experience so stimulated Harle that he immediately gave up his job at the school and set up as a yacht designer himself.

The first of what became known as the Maïca class was commissioned by French yachtsman Henri Rouault who had admired Illingworth’s earlier successful racer “Belmore” and asked for a smaller version. She was built by Burnes of Bosham and launched at Easter 1960. At the suggestion of Rouault’s sister, a nun, the boat was named after her convent’s former Mother Superior, a decorated heroine of the wartime resistance, who was known by the nickname “Maïca”. (image: drawings for the transom stern Maïca)

The original Maïca, like the Belmore design, had a transom stern. She was so admired and so successful, winning the RORC Class III championship in 1962 that soon further examples were built in Britain and in France, but when Illingworth sold the plans for the Maïca to Constructions Mécaniques de Normandie at Cherbourg, Felix Amiot, the owner of the yard, insisted that the design should be modified with a counter stem. Apparently this was because M. Amiot wanted a Maïca for his own personal use and he preferred the elegant look of a counter stern.

So Illingworth and Primrose produced plans for a “Maïca à voûte” (counter stern) and in 1963 CMN started to build this version employing a novel method of construction that made series production viable – cold moulded mahogany. A first lightweight layer of 1cm planks was laid longitudinally over formers, then two diagonal layers, each 4cm thick, at right angles to each other. When the glue had cured the hull was simply lifted off the formers and turned right way up for decking and fitting out.

CMN built 38 Maïca class yachts, about half of which are known to be still sailing and in superb condition. The CMN Maïcas were mostly sold to French clients, (one was ordered by the Greek ambassador to Paris), but many went to customers from Britain and other countries. Some of these boats were among the most famous offshore racers of their day – and many were scoring notable wins even ten years after the introduction of the class With so many international racing successes and long voyages, the class also made a name for itself in Mediterranean waters and it was not long before a couple of Italian yards obtained licences to build slightly modified versions. One Italian version, of which over a hundred examples were built, was in GRP with a modified fin keel and skeg underwater profile.

MOWGLI was launched at Cherbourg in April 1965 for an invoice price of £7,000 and was owned by Michael Jones and his cousin Quentin Jones. Both were committed RORC members and had started offshore racing campaigning an RNSA 24 owned by Norman Jones. After a trial sail MOWGLI left Cherbourg to be based in the care of Solent Marine Sevices, Gosport.

MOWGLI was campaigned in numerous RORC races. For the record she won plenty of prizes in class but no trophies. During the seven years up to the end of the 1971 season she had entered thirty-six RORC events including four Fastnets and she had finished thirty of them. Also there had been plenty of excitements in those pre-GPS days. In the 1967 Fastnet she narrowly missed being swept onto the Rock when the wind dropped at a crucial moment. You could have heard a pin drop on deck as we just edged past. Then in the 1968 Lyme Bay race, the crew located the Lyme Bay buoy in the middle of a black night by the sound of its bell and by identifying its name with a torch, somebody had forgotten to tell the RORC that the light wasn’t working. Next in the 1969 Cowes-Dinard, she sailed for forty miles under spinnaker from Les Hanois in dense fog to, the finishing line in the rock strewn entrance to St. Malo and was extremely lucky to pick up the lights on the RORC committee boat at the finish only 50 yards ahead.

In 1972 MOWGLI was laid up for the whole year at Gosport and in 1973 Quentin Jones sold his share in the boat to another keen RORC member – Harry Carter Jonas. During this period further improvements to racing performance were made including wind instruments and a new Proctor metal boom to replace the original wooden one and carrying a smaller mainsail to improve handicap. From 1973 to 1975 a further ten RORC races were entered with no better results and in August 1975 it was decided to depart from the UK for a stay in the Mediterranean. From 1975 to 1977 MOWGLI was based on a swinging mooring at Andratx, Majorca. During this time long crossings were made to Malta, Greece and Spain but no racing. In 1977 the yacht sailed back to the UK and from then on was based on a swinging mooring at Wicor, Portchester and laid up for the winter at Wicor Marine. In 1978 Harry Carter Jonas offered his share to Michael Jones who now became the sole owner.

Alter the drama of the 1979 Fastnet which MOWGLI was lucky enough not to have entered, the next RORC challenge was the non-stop Round Britain and Ireland race in 1980 and before that was the removal of the original Couach engine to be replaced by a Petter diesel producing 7hp. As for the Round Britain Race for the second time MOWGLI suffered major rigging problems which caused unscheduled stops at anchor for repairs but happily not the abandonment of the race. This time it was the Talurit splices which caused the trouble and in the circumstances it was a major triumph to complete the 1860 mile course. As for other RORC events in the 1980s the yacht took part in several including one Fastnet and two holiday races to South Brittany, all very enjoyable but no prizes. MOWGLI had acquired a new partner, Norvela, Michael Jones’ wife. Norvela was already an RORC member.

In 1989 after a cruise to NW Spain and a winter spent on a swinging mooring at La Corunna MOWGLI returned to Wicor Marine. In 1992 MOWGLI left Wicor to be permanently based in Brighton Marina. It was the first time that the yacht had enjoyed the luxury of a pontoon berth. Some time before this move took place there had been a chance meeting with a committee member of the RORC who suggested that under the new CHS handicap rule which had just replaced the IOR MOWGLI might be better off bringing back her quadrilateral genoa. Consequently the new sail had been ordered from Lucas and in 1991 the yacht now armed with Decca navigational won her first RORC trophy – the Myth of Malham Cup, highly appropriate for a Maica. The race was a short one – the 110 mile Cowes-Fecamp course, sailed in very calm conditions.

Although MOWGLI continue to compete from time to time in the RORC programme, it was decided to start taking part in some ‘Round the Buoy’ racing and short passage events like the ‘Round the Island’ race. Most of the ‘Round the Buoy’ races were organised from Brighton marina under the flag of the Brighton Marina Yacht Club. They took place on every Sunday throughout the year and on Wednesday evenings in the summer. They were all very enjoyable and MOWGLI notched up quite a few prizes.

In August 1999 after ending her RORC career on a high note with a class win in the Fastnet, MOWGLI left Plymouth for the French Mediterranean coast. She found a berth in the large marina at Bandol where the facilities and climate were excellent for the upkeep of an elderly wooden boat. Furthermore Mowgli’s racing career was far from over. She took part in many local regattas, several coastal passage races and one offshore event to the island of Pantelleria with stopovers in Sardinia and Sicily. MOWGLI was accepted by the CIM for the classic regattas where she received a more favourable rating and gained a few prizes including a class win at Ajaccio. Other regattas took place at Palma, Mahon and Antibes. But the favourite venue was of course Saint-Tropez where the yacht took part on four occasions.

Soon after her arrival in Bandol, it was necessary to install Mowgli’s third auxiliary engine – this time a Yanmar GM10 (9 HP) with a new propeller. This was a much better auxiliary for Mediterranean conditions. Also it was decided to engage a local Company – Chantier Naval des Baux (CNB) to carry out a complete refit and repainting of the hull using the West epoxy system without applying the cloth. The work was carried out in the open at Bandol and CNB quite rightly insisted that the topsides colour should be changed from dark blue to white – an essential change for Mediterranean conditions. The job was done in 2001 and ever since thankfully MOWGLI’s hull has required very little upkeep.

A reluctant decision to call a halt to further racing and concentrate on Mediterranean cruising. After all the Maica was designed as a cruiser/racer. Consequently in recent years long cruises have been made to the Balearics, Italy, Corsica, Sardinia and the Costa Brava. By modern standards MOWGLI cruising comforts may be slightly spartan but the yacht behaves impeccably in all weathers and if the sails are trimmed properly will happily sail herself if the wind is forward of the beam.

DISCLAIMER: Classic Yacht Brokerage offer the details and photographs of this vessel in good faith as a guide but cannot guarantee the accuracy of this information or images, or warrant the condition of the vessel, machinery or rig. Buyers should instruct their representative, agents or their surveyors to investigate such details as the buyer requires validated. This vessel is offered subject to prior sale, price change, or withdrawal without notice.

Important Note: The particulars / images of the vessels listed on this website are believed to be accurate but are not guaranteed, buyers should satisfy themselves regarding the same. No warranty is given as to the condition of vessel's hull, machinery and equipment / gear and an examination by a qualified marine surveyor is always recommended.

Boats for sale
by continent

Boats for sale
by country